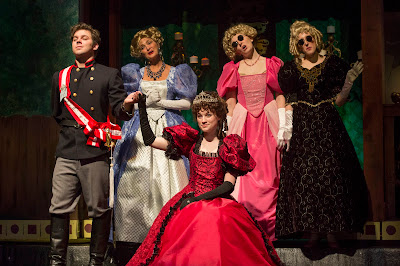 Into the Woods begins as any good story should with Once Upon a Time. The famous musical reintroduces us to well-known fairy tale characters. We meet Cinderella, Jack (and his bean stalk), Rapunzel and Little Red Riding Hood at the beginning of their stories. The second half takes a look at a different ending for those we left with their “happily ever after.” These are not the sanitized fairy tales found in Disney films. They are instead a dark picture of what might have happened when the story book closed and our characters were left to settle into their chosen lives.

Our main character is a mild-mannered Baker. He and his clever wife, Susie Harloff, are childless after being cursed by a local witch. She tells them they can cure their state by going on a quest and gathering four strange items. This journey leads the baker to cross paths with the other fairy tale characters. Harloff is great as his frustrated partner in crime, helping him achieve his goals behind the scenes. 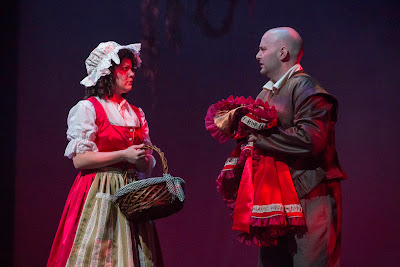 For me, the highlight of the show was the “Agony” duet between the two princes. Justin Klein and Andy Baker play two pompous, self-absorbed boys who want only what they can’t have and in this case that’s a couple unattainable women. Their desperate ballad was both hilarious and beautifully performed.

The set is incredible. Huge trees draped with moss surround a rotating wooded stage. It’s no surprise to discover its designer is the talented Robert Koharchik. The music and lyrics are by Steven Sondheim and his distinct style tends to be split audience reactions right down the middle. People either love him or they don’t.  If you enjoy the music and embrace the silly sarcastic atmosphere, then it’s entertaining. The musical is a long one and begins to feel a bit repetitive towards the end. There is an intermission, but expect a long second half before things wrap up. 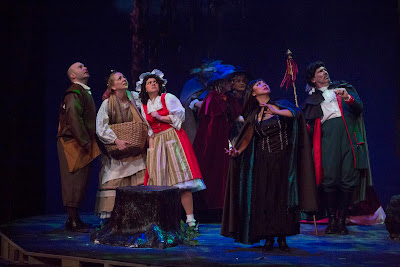 Performances: The show closes May 11. Performances begin at 7 p.m. Wednesday through Friday, 2 p.m. and 7 p.m. Saturday and 2 p.m. Sunday. The Booth Tarkington Civic Theatre is located at 3 Center Green, Carmel, IN 46032 at the Center for the Performing Arts.

Tickets: Ticket prices start at $39 and can be purchased by calling (317) 923-4597 or visiting www.civictheatre.org. There are $13 tickets available to students with a valid ID.