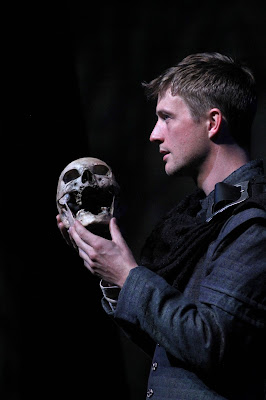 This season the American Players Theatre is tackling one of Shakespeare’s most revered tragedies, Hamlet. This production includes the full text and clocks in at three and a half hours with one 20 minute intermission. And they’ve made every single minute count!

The show stars Matt Schwader as the tortured prince. He nails Hamlet’s infamous rise and fall of emotions and his delicate balance of sanity. He also manages to infuse just the right amount of humor and snark into Shakespeare’s lines. He is broken and grieving and yet he embraces his role of feigned madness to achieve his goal. It’s a powerful performance. 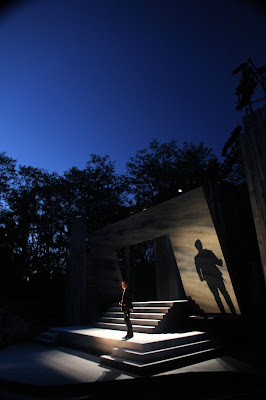 The intense drama deals with the issue of grief and love in equal parts. Hamlet is reeling from the death of his father when he finds out that his mother has married her former brother-in-law. Their marriage comes so quickly on the heels of the death that Hamlet resents both of them. Soon he learns his father was actually murdered by the usurping king, his own brother. To avenge his father’s death Hamlet abandons all that he loves, including the maid Ophelia, to pursue his revenge.

Jim DeVita plays the villainous king. He is confident, flouting his lust and passion in front of the court with his new bride. Their gaudy costumes provide a sharp contrast to Hamlet dour mourning clothes. Christina Panfilio plays Ophelia with a light playfulness in the earliest scenes, making her inevitable downfall all the more painful. We watch her heartbreak as she loses first her love and then her father in rapid succession.

BOTTOM LINE: It’s a production that’s not to be missed! 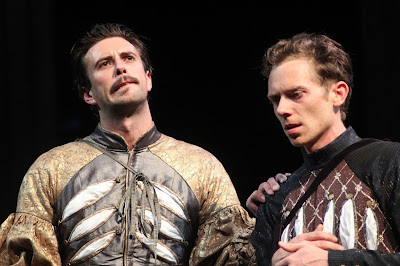 Rosencrantz and Guildenstern are Dead

The back-and-forth between the two men reminds me of Waiting for Godot with its confused meandering. The two main characters are always out of the loop, the action of Hamlet taking place just off stage. Hamlet and R&G were produced back-to-back with the entire cast of each remaining the same in both plays. The costumes changed drastically, taking on a farcical, exaggerated feel in R&G. 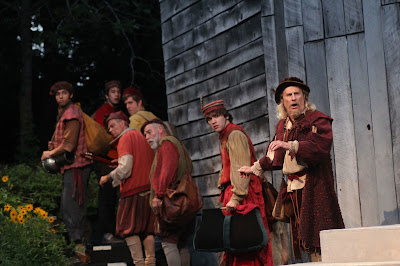 The show has the feel of a buddy comedy, the earliest version of “Dumb and Dumber.” Two loveable but naïve guys caught up in something they don’t understand. Rosencrantz (Ryan Imhoff) is an innocent simpleton, but he has moments of insight. Guildenstern (Steve Haggard) is the straight man, trying to keep them out of trouble.

BOTTOM LINE: Having the opportunity to see the two shows in one day was incredible. This show is rarely produced and seeing it in tandem with Hamlet is even harder to find. What a treat! 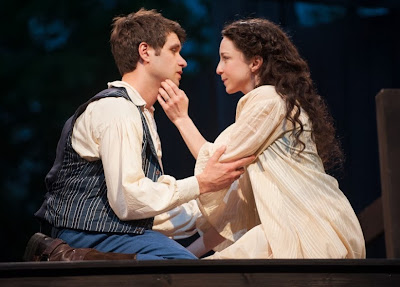 One of APT’s strengths is its willingness to produce Shakespeare’s lesser known work and his “problem” plays. Two Gentlemen of Verona often finds itself in that category. The play has an unlikeable lead and a troubling ending, but it’s a comedy. APT embraced these challenges and the result is a show that focuses on the impetuous nature of youth and the turmoil that can often come with rash decisions.

Two best friends fall in love with different women, Proteus with Julia and Valentine Silvia. After sweet words are said and rings exchanged the lovers are all separated. No sooner has Proteus left Julia’s side then he betrays her and decides he is in love with his best friend’s girl, Silvia. She wants nothing to do with him. Proteus’ inconsistent love and selfishness threaten to ruin everyone’s happiness as the plot unfolds. 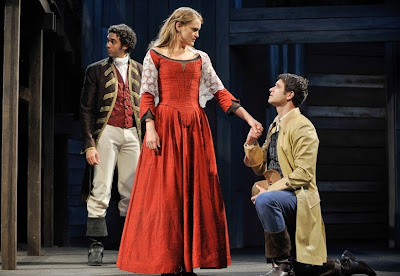 The plot contains many of the devices Shakespeare later became famous for using. There is a girl pretending to be a boy in order to get close to a man she loves, there's an escape to the forest to flee an angry father, etc. Each of these elements is used more successfully in some of the Bard's later work, but the seeds of those ideas were first seen here.

All three of the servants stole the show; Will Mobley as Valentine’s man Speed, Kelsey Brennan as Julia’s sassy maid and Steve Haggard as Launce with his wonderful dog Crab. They made bawdy jokes and played to the crowd at all the right moments.

BOTTOM LINE: The core story may be tragic, but a great supporting cast makes this seldom produced play an entertaining one. 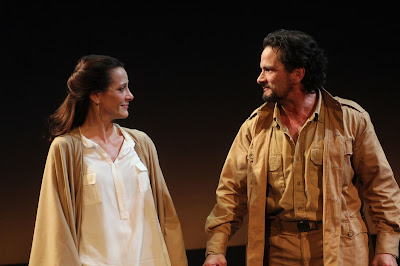 One of the most infamous romantic pairings in history, the story of Antony and Cleopatra was used by Shakespeare to create this tragedy. Rome is in turmoil as different powers vie for the throne, but all the while Antony is off in Egypt embroiled in a new romance with Cleopatra.

This production strips away pieces of the play to focus on the love story with the political upheaval in Rome acting as the background. The minimalist style works well to tell the story, using only seven cast members and a simple set the emphasis is firmly on the title couple. The choice to use modern clothing, like tuxes and khaki pants and other present day elements, like the sound of helicopters, is distracting at times. 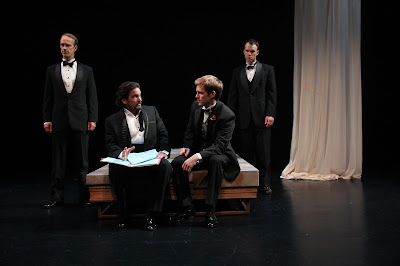 Tracy Michelle Arnold is excellent as the untamed Egyptian Queen. Her smoky voice is at times that of a petulant child and at others the sultry purr of a contented lover. Jim DeVita is Antony, both powerful in war and weak in love. The two radiant heat in their scenes, whether it’s romantic love or furious anger. The play is well-suited for the indoor Touchstone Theatre, which offers a more intimate setting.

BOTTOM LINE: Lovers quarrel and nothing ends well. It’s classic Shakespeare with an excellent cast, but the modern clothing and other elements were a bit distracting.

The American Players Theatre is open until October 20 for its regular season. It will host a special show, Les Liaisons Dangereuses, opening November 1 in its indoor Touchstone Theatre.

The theater's outdoor seats are comfortable, but definitely bring a jacket, rain parka, blanket, bug spray or sun block depending on the weather. The show will go on even if it's chilly or drizzling. There are easily accessible restrooms and concessions at both the Up-the-Hill Theatre and the Touchstone Theatre. There are also picnic tables for those who bring lunch or dinner for before a show.

There are plenty of camping/B&B/cabin/hotel options nearby, depending on your preference. You can find additional information about where to lodge, restaurants and other attractions on APT's website.

For more information about APT and Spring Green, WI visit its website. Spring Green, Wi is only 6.5 hours from Indianapolis and makes a perfect weekend getaway! There are attractions for the entire family in addition to the APT, including the Wisconsin Dells water parks, House on the Rock, Taliesin and a golf resort.