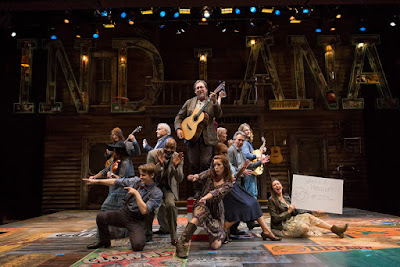 In a year where election campaigns can leave you feeling little love for your country and state, the Indiana Repertory Theatre’s unique production “Finding Home: Indiana at 200” is a welcome respite. I’ve never felt so misty-eyed about my Hoosier heritage. The play was created to celebrate the state’s bicentennial and is a combination of the work of dozens of artists. It compiles original music, created by Tim Grimm and performed by his family band, with short plays about Indiana’s history.

There are no restrictions on content, except it has to be about Indiana. From Cole Porter to James Dean, Princess Mishawaka to Eli Lilly, the richness of Hoosier history unfolds beautifully.  They touch on the Indy 500 and IU basketball, but the other pieces are thankfully not heavy on sports; even those two focuses on lesser known elements. 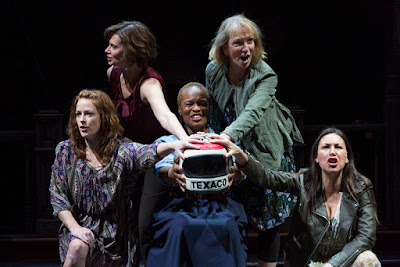 Many of the pieces are based on facts familiar to Hoosier, but the writers give those common stories a face and bring them to life.  I’m grateful the stories didn’t paint all of Indiana’s past in a rosy light. There are pieces on Ryan White and the Ku Klux Klan. Like any state, we have heartbreak threaded throughout our history.

The ensemble cast works so well together. There is a live band on stage performing Tim Grimm’s original pieces. The rest of the cast takes on a new role with each new skit. Two IRT newcomers, Aaron Kirby and Michael Joseph Mitchell, were particularly good.  Robert Mark Morgan’s set design weaves hints of Indiana into every inch of the stage. It’s a piece of art in its own right.

There is so much history packed into the show, but it rarely feels like a classroom. Some of the pieces could have used a bit more editing, especially since they were attempting to cover so much ground in the production. Some work better than others, but as a whole the production is a strong one. 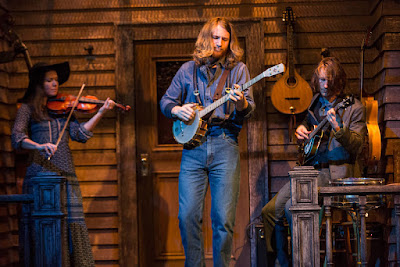 The one frustrating thing is that there were so many contributors they decided to split the content into two separate productions. I saw the “blue” production, but there is also a “gold” production with 70% different material. It’s certainly a good problem to have, but if you can’t make it to both you’re left wondering what you missed.

Don’t miss this chance to see your state’s history come alive on stage! Hearts. Land. Indiana. Here’s to the next 200 years.


The Indiana Repertory Theatre is located at 140 W. Washington St., Indianapolis, one-half block west of the Circle Center Mall between northbound Illinois St. and southbound Capitol Ave. "Finding Home" runs until Nov. 13 on IRT's Upperstage. Times for performances can be found at www.irtlive.com or by calling the IRT box office at (317) 635-5252. To purchase tickets call (317) 635-5252 or order online at www.irtlive.com

Photos courtesy of the IRT